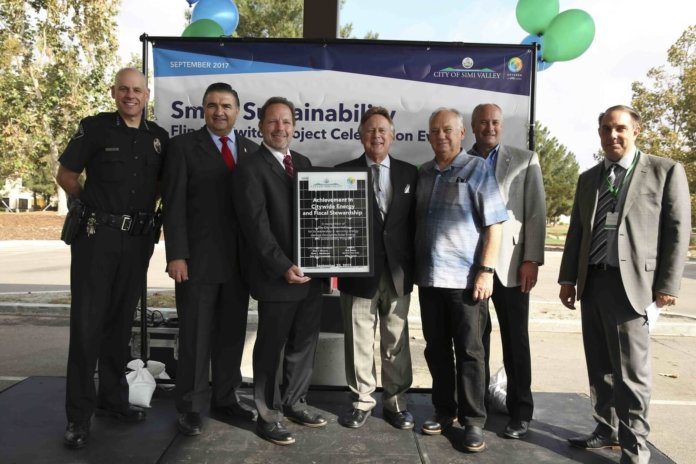 The City of Simi Valley, Calif., celebrated completion of a city-wide solar program during a “flip the switch” event at the Simi Valley police department last week. The police department is one of five municipal locations with new rooftop solar, solar ground mount, and solar canopy parking structures that is now generating enough clean, renewable energy to power one-third of all city-owned facilities.

Regional leaders from the Ventura County Office of Education and other local elected officials attended in support of the impactful energy project, which is expected to save the city government $15.5 million in energy savings over the first 20 years of production.

As Simi Valley Mayor Bob Huber shared during the event, “Along with our successful solar program this year, we are also very proud of our high school Energy Ambassadors who helped educate our residents about easy steps we can all take to be more sustainable with our resources – helping to save Simi Valley households financially as well. As a result of Simi Valley Conserves, these hardworking students engaged community members at 80 events and helped organize energy consultations for 280 homes.”

John Mahoney, president and CEO of OpTerra Energy Services, stated, “Through a successful, united partnership, the City of Simi Valley and OpTerra have achieved a fiscally and environmentally advantageous program that will have long-term positive economic and human impact in the community. OpTerra is proud to recognize Simi Valley’s leadership as a steward of taxpayer dollars in Ventura County, integrating long-term energy savings projects into plans to improve public services, as well as prioritizing the build-out of a successful student internship program tied to the energy work.”