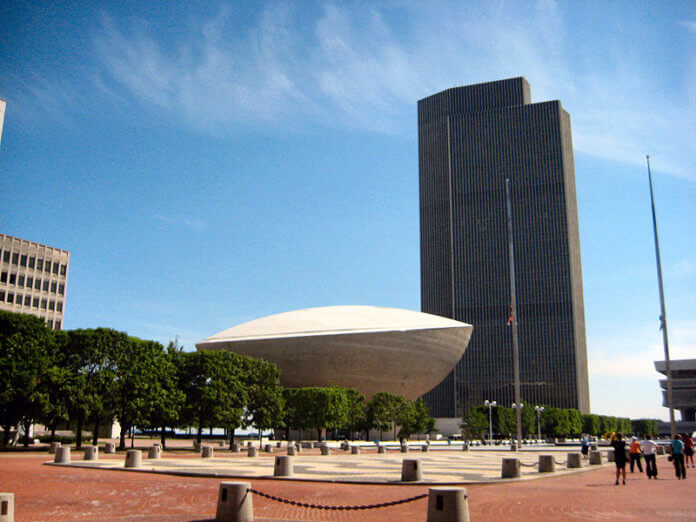 The New York Power Authority (NYPA) and Office of General Services (OGS) are partnering on the development of solar energy generation to power Empire State Plaza in Albany, as well as energy efficiency and resiliency upgrades at the complex.

NYPA and OGS will collaborate on a large-scale remote solar array in Oneida County that will provide up to half of Empire State Plaza’s power needs. The plaza will also install on-site solar panels and electrical energy storage to augment the project.

The solar and additional energy efficiency and emission reductions at the plaza directly advance the goals of the state’s Climate Leadership and Community Protection Act.

NYPA and OGS evaluated energy options through a series of technical reviews, community listening sessions and meetings with neighborhood associations.

“This path forward will greatly improve reliability, resiliency and sustainability at Empire State Plaza,” comments Gil C. Quiniones, president and CEO of NYPA. “NYPA and OGS will work closely together on the deployment of the remote large-scale solar project in Oneida County, marking the development of the largest concentration of distributed-scale solar generation in New York State.”

The development of the remote solar project is still in the preliminary stages, but the proposal calls for it to be placed on state-owned land near the former Oneida County airport, with the power generated being injected into the electric grid and credited to powering the plaza facilities in downtown Albany.