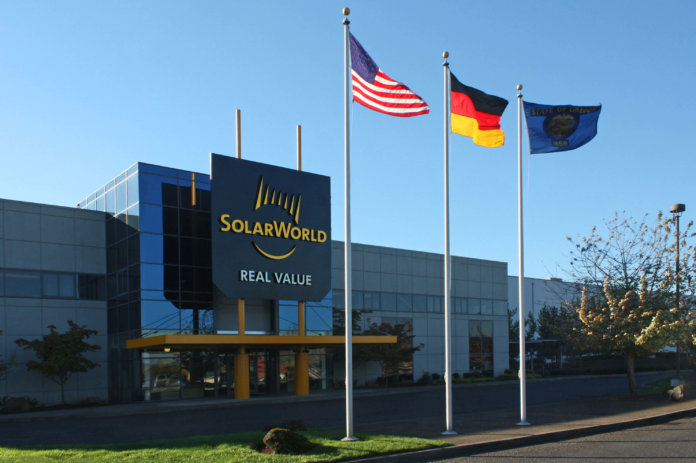 Citing Friday’s trade case ruling, SolarWorld Americas Inc. has announced plans for the crystalline-silicon solar manufacturer to immediately begin ramping up production at its Hillsborough, Ore., plant and hire up to 200 workers by May 2018 following a mass layoff earlier this year. However, a spokesperson has verified to Solar Industry that SolarWorld Americas is still exploring a possible sale of its business, among other options.

In a press release, the company claims the plans to ramp up production and rebuild its workforce is in response to last week’s trade case decision and comes with the prospect of meaningful import relief close at hand. On Friday, the U.S. International Trade Commission (ITC) voted 4-0 in favor of a trade case determination that a surge of imports has seriously injured the domestic solar cell and panel industry. The vote means that the case, in which SolarWorld Americas and Suniva Inc. are co-petitioners, moves to a remedy phase.

In its release, SolarWorld says the determination, combined with strong sales volumes and committed vendor relationships, will lead the manufacturer to boost production. By the end of the ramp-up, the company expects to employ about 500 workers, some of whom will be returning employees. SolarWorld’s Oregon plant has been operating with about 300 workers – down from approximately 800 – after making a mass layoff earlier this year.

“Our struggle has always been about keeping alive the pioneering U.S. solar technology industry as well as its workforce, from Ph.D. scientists to line workers,” says Juergen Stein, CEO and president of SolarWorld Americas, in the press release. “With relief from surging imports in sight, we believe we can rev up our manufacturing engine and increase our economic impact.”

Stein adds, “Friday’s determination made clear that the U.S. industry’s problems have not been self-inflicted, but rather are the result of surging imports. As such, we at SolarWorld are prepared to scale up our world-class manufacturing operations to produce leading solar products made by more American workers.”

In May, the manufacturer’s struggles to maintain operations had intensified after German parent company, SolarWorld AG, filed for insolvency. Although the U.S. arm was not part of those insolvency filings and its parent recently started anew in Germany, spokesperson Ben Santarris tells Solar Industry that SolarWorld Americas is still exploring various options to ensure its future.

“SolarWorld Americas Inc. continues to undergo a mergers-and-acquisition process to discover all possible solutions, including, but not limited to, a sale,” says Santarris. “The company will carefully review all scenarios with an eye toward finding the one that best promotes the long-term success of the U.S. business.”

Following its Friday decision, the ITC will now conduct the remedy phase, including a hearing on Oct. 3 and a recommendation to President Donald Trump by Nov. 13. Trump will then have about two months to reject, accept or change the ITC’s remedy proposal. (For more details and commentary on the commission’s Friday vote, click here.)