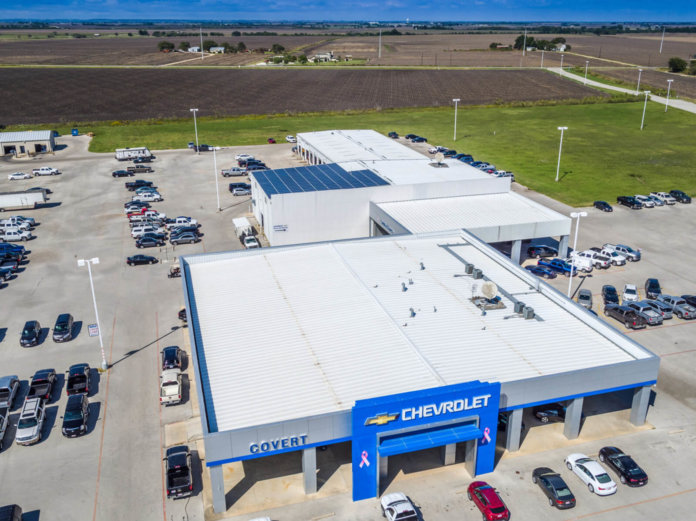 Like many other businesses, auto dealerships across the U.S. are increasingly adopting solar, and SunPower recently highlighted how its network of solar dealers has helped auto companies make the transition.

Across the country, SunPower solar dealers – many of which are also locally owned small and midsize businesses themselves – have helped auto dealerships put empty rooftops and expansive parking lots to better use with solar energy systems. Oftentimes, these systems serve a dual purpose: While generating enough energy to significantly reduce an auto dealership’s electricity costs, they also offer protection to whatever is underneath – be it a newly constructed roof or a fleet of new cars.

Featured automotive companies with SunPower systems include the following:

Luther Auto Group in Minnesota. As one of the largest privately owned automotive groups in the Midwest, Luther now has 454 kW of solar installed across 10 locations. SunPower dealer Energy Concepts sold, designed and installed the systems, which combined are projected to generate more than $2.1 million in electricity cost savings over 25 years.

“Solar just makes good business sense in today’s energy environment and has become integral to many of our facilities’ energy-efficient designs,” says Linda McGinty, vice president of real estate at Luther Auto Group. “Over the last five years, we’ve worked with Energy Concepts to install over 450 kW of high-efficiency SunPower solar at 10 of our dealerships across Minnesota and have seen significant energy savings as a result.”

Covert Auto in Texas. Serving the Central Texas community for five generations, Covert now has 125.6 kW installed across the roofs of its Ford and Chevy dealerships in Hutto. Freedom Solar Power sold, designed and installed the systems, which combined meet 53% of the company’s electricity needs and are expected to generate more than $500,000 in energy savings over 25 years.

Boulder Nissan in Colorado. More than 50 kW of rooftop solar is currently installed at Boulder Nissan, well known in the community for its leadership advancing the adoption of electric vehicles. SunPower dealer Independent Power Systems sold, designed and installed the system, which meets 20% of the company’s electricity needs and is expected to generate $384,000 in energy savings over 25 years when combined with the dealership’s upgrade to LED lighting throughout the facility.

“It’s inspiring to help auto dealers see a return on their solar investment in five to seven years, with some becoming cashflow positive in as little as one month,” says Ryan Ferrero, CEO of Ignyte Lab, which partnered with Independent Power Systems. “When we can show auto dealership owners the financial benefits of using renewable energy and adopting sustainable business practices, high-quality solar energy solutions end up selling themselves. And with more than 17,000 new car dealers across the U.S., there’s a huge opportunity to help more in the industry save on electricity costs with solar.”

Like car dealers, global automakers recognize the benefits of investing in solar, as well. In Plano, Texas, SunPower is working with Toyota to install an 8.79 MW system at the Toyota Motor North America’s new headquarters. When complete, it is expected to be the Lone Star State’s largest corporate office on-site solar installation among non-utility companies, according to SunPower.

“It’s no surprise that an increasing number of auto customers find solar to be a reliable, effective way to reduce electric bills while freeing up operating capital and improving their environment with emission-free energy,” comments Nam Nguyen, executive vice president of SunPower. There are currently more than 17 MW of SunPower solar systems under construction or operating at auto companies across the U.S.