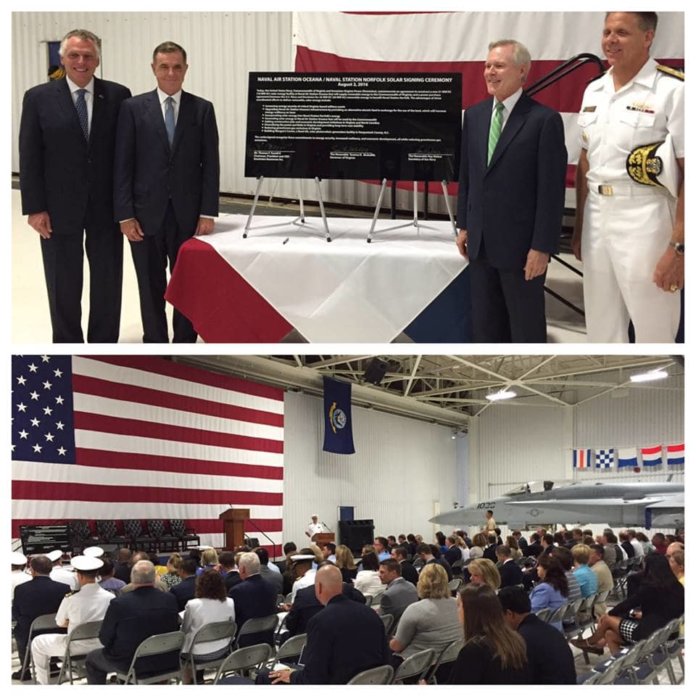 Dominion Virginia Power, the U.S. Department of the Navy and the Commonwealth of Virginia have reached an agreement to construct a 21 MW solar energy facility at Naval Air Station Oceana in Virginia Beach, Va.

“Solar is an integral part of Dominion’s commitment to renewable energy,” says Thomas F. Farrell II, Dominion chairman, president and CEO. “The Oceana solar facility, along with four other large solar facilities we have announced in Virginia, will bring clean energy to the state, new jobs and other economic benefits. Partnerships like the ones highlighted with the Department of Navy and the commonwealth help to make our state a more attractive place to live, work and do business.”

Dominion says it filed a certificate of public convenience and necessity permit with the State Corporation Commission on Aug. 1, and the facility is expected to be completed and operational in late 2017. In exchange for the nearly 100 acres that will house the 179,000 solar panels, the Navy will receive an alternative electric feed, which will increase energy resiliency on the base. The facility will produce enough electricity at peak to power about 4,400 homes.

“This announcement shows that the commonwealth is leading by example in driving the clean energy economy forward in Virginia and working to combat climate change,” comments Gov. Terry McAuliffe, D-Va. “It also highlights the importance my administration places on working with our most important economic partners like the U.S. Department of the Navy.”

Dominion will retire, on the commonwealth’s behalf, renewable energy certificates (RECs) in an amount equivalent to the amount of RECs generated by the Oceana solar facility.

This is the second solar project Dominion has collaborated on with the Navy. In December 2015, construction was completed at Morgans Corner, a fixed-tilt, 25 MW facility spanning 110 acres and consisting of 81,054 solar panels located in Pasquotank County, N.C. The project is under a power purchase agreement.