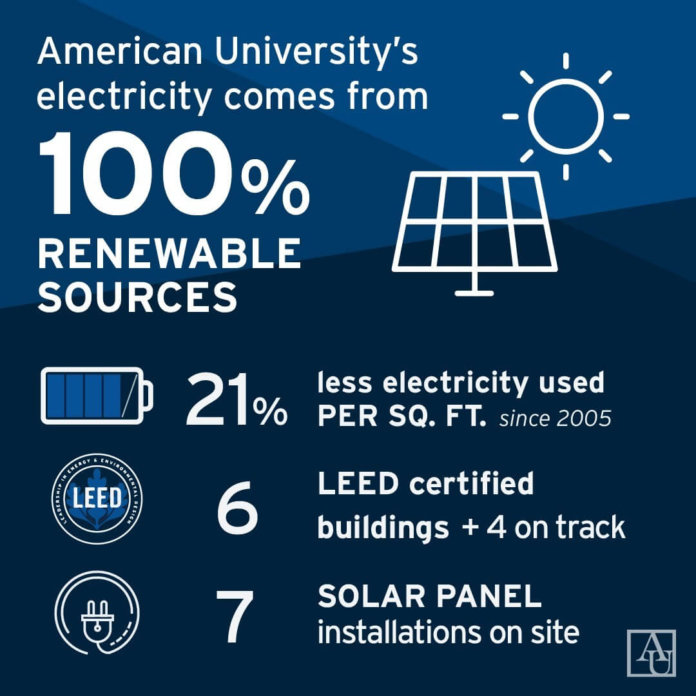 Notably, 100% of AU’s electricity is renewable, with 50% coming from solar. The university has seven on-site solar installations and buys power from a 250,000-panel project in North Carolina. AU also purchases renewable energy credits. For transportation, 100% of the university’s shuttle buses run on biodiesel.

“Our community joined together to accomplish this important goal established in 2010,” says Sylvia M. Burwell, president of AU. “We wanted to demonstrate leadership and innovation in addressing the serious social, economic and environmental issues associated with global warming. Having a net-zero carbon footprint reflects our commitment to acting on our values and leading into the future.”

The school met carbon-neutral guidelines set by Second Nature, a nonprofit dedicated to accelerating climate action in and through higher education.

“As the first university to achieve carbon neutrality – and achieving it two years ahead of schedule – American University is truly raising the bar for the country,” says Timothy Carter, president of Second Nature.

AU’s carbon-neutral campus is the result of a campus-wide community effort that was led by strategic planning efforts of the office of sustainability and students, faculty and staff. It also included significant contributions from offices such as facilities management and transportation. AU strategically approached the goal of carbon neutrality by driving down greenhouse-gas emissions wherever possible, then using renewables, and, finally, purchasing offsets that aligned with the source of emissions.

“Sustainability is something that our students care deeply about. But more than talking about it, we have to model the behavior we want to see in the world around us,” says Kiho Kim, environmental science professor at AU. “Achieving carbon neutrality is a very strong statement about what is important to us, the entire AU community, and shows that we will continue to lead by example.”